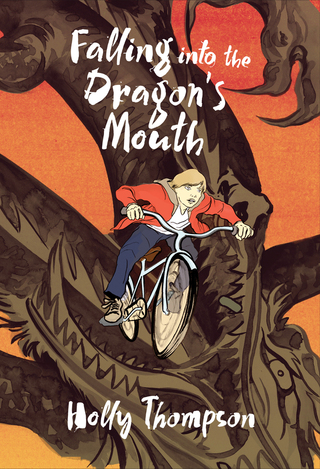 "A poetic tale of overcoming school bullies." --The Japan Times

In a Japanese seaside neighborhood lives Jason Parker: a sixth grader, one year older than his classmates, a stinking foreigner to some, an orange belt in aikido, a big brother. Jason Parker is just a boy trying to get through his days with calm and courage. If only everyone around him would let him. This is a beautifully spare novel in verse about one boy's life--a story that will resonate with anyone who has ever struggled to fit in.

Read the 30 NoticePoems that go with Falling into the Dragon's Mouth. These poems are all companion poems to the novel, in Jason's voice, with Cora and various other characters making occasional cameo appearances. The series features a poem and photo posted each day during National Poetry Month--poems that feature the Kamakura, Japan, setting for the book on Holly Thompson's Hatbooks Blog . Do you know the world in your town? Try writing your own #NoticePoems!

Order Falling into the Dragon's Mouth from your library, your local bookseller, or from Indie Bound, Amazon, or Amazon Japan.

Reviews
"Told through the eyes of a middle school American boy who is living in Japan, students have a compelling account of issues ever present in society today and how to deal with them: bullying, feeling isolated, not fitting in, cross-cultural understanding, and how to survive teenage years. It is also a window into Japanese culture and school life, while exploring emotions and issues that all teenagers are constantly facing when “friend groups” dominate and exclusion is visible and difficult, especially when moving across the cultural pathways." --2016 NCTAsia Freeman Book Award Honorable Mention

"'Falling into the Dragon’s Mouth': a poetic tale of overcoming school bullies. In her third verse novel, Japan-based writer Holly Thompson tackles the topical issue of bullying. Her protagonist, likable American sixth-grader Jason Parker, struggles to fit in at his Japanese elementary school after moving from America to a seaside community on the Shonan coast in Kanagawa Prefecture. However, things go from challenging to overwhelming when he is assigned to sit with the cattiest girls and most pugnacious boys in his class. The teacher turns a blind eye as the level of surreptitious bullying escalates, and Jason has to rely on his own wits and inner strength to get by, drawing on his aikido training for inspiration. His well-meaning but rather clueless parents are of little practical help — they’re too wrapped up in their busy teaching careers and trying to save enough money to send Jason to an international school. Jason realizes that employing American-style justice will only exacerbate the situation and, in the end, his strongest ally turns out to be his plucky younger sister. An eclectic cast of supporting characters, some of whom are misfits in their own way, add interest to the story. The author does a laudable job of presenting a warts-and-all view of Japan’s contemporary classroom culture and kids teetering on the brink of adolescence. Despite the heavy underlying themes, Thompson adds dollops of humor in the right measure and the fast-paced plot will have her young audience reading furiously right up until the satisfying and realistic conclusion." --Louise George Kittaka, The Japan Times

"Jason is an American sixth grader living in Japan. As a foreigner, he stands out and is relentlessly bullied by his classmates while the teacher turns a blind eye. His only refuge is in the practice of Aikido, where he learns to center himself. The themes of bullying, feeling isolated, not fitting in, and striving to change the system are familiar landscape for Thompson, and fans of her teen books—Orchards (2011) and The Language Inside (2013, both Random)—will relish her first novel for younger readers. The plot builds slowly at first as the characters and setting are established. Readers' patience will be rewarded as the tension mounts between Jason and the bullies who torment him, leading to a heart-pounding climax when the games almost go too far. The free-verse format suits the story well, conveying Jason's emotions powerfully in few words, allowing readers to fill in the unsaid and mirroring the way Jason uses stoicism as a survival method at school. Those with some knowledge of Japanese culture will feel at ease with the setting right away, and those looking for a window to another culture will be intrigued by the realistic depiction of Japanese school life. Thompson provides a helpful glossary and cultural notes at the end, and graceful ink brush illustrations add to the atmosphere. VERDICT This stirring read will especially resonate with those who have been bullied—it will let them know they're not alone." --School Library Journal

"Jason’s family moved to Japan three years ago. Kamakura is an “out-of-the-way / seaside neighborhood / where hardly anyone / isn’t Japanese,” and Jason’s “the nail / that sticks out / just waiting / to be hammered down.” In school, he’s matched with five unfriendly classmates to sit, study, and do school chores with for the next two months. They taunt, punch, and kick him, even whacking him with a broom handle, ostensibly for getting a word wrong or having an accent. The text subtly yet steadily ratchets up suspense by using line breaks and spacing instead of periods; the free verse hums with a sense of impending danger. Is it the bullies that threaten or something natural, like a coastal typhoon? At the crisis moment, Jason’s sharp-as-a-tack younger sister leaps in to help, creating a satisfying culmination of their unidealized but deep and companionable relationship. Well crafted and emotionally compelling . . ." --Kirkus Reviews

Not all American expatriates live a cushy life in Japan. Jason would be in sixth grade back home, but he is fully immersed in the local public school, where, despite his excellent language skills, he sticks out like a sore thumb, attracting a vicious group of bullies. The teachers turn a blind eye as Jason suffers and the tension mounts between him and his tormentors. Meanwhile, his mother takes on extra English students, struggling to find tuition for the local American school, but will that day come soon enough? And how far will the bullies go in their quest to disgrace the American boy? To survive, Jason must rely on his own ability to listen to others, his powers of quiet observation, and, above all, his personal courage. Based on Thompson’s own family experiences living in Japan, the story rings true in every detail, and occasional, lovely brush-and-ink illustrations enhance the reader’s experience. The closing glossary is also helpful. --Booklist