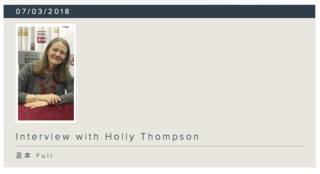 Interview of Holly Thompson by Laura Shovan of AuthorAmok

Guest Post on Cynsations: Holly Thompson on the Perfect Setting and Orchards

"On Wakame and Bicultural Fiction for Children" in the SWET newsletter
Interview of Holly Thompson by Avery Udagawa for the Society of Writers, Editors and Translators, Japan
Interview with Holly Thompson in Here and There Japan

When did you start writing?
In grade six I started writing narrative poems--one of which was performed on the PBS show Zoom. As a teen I wrote poems that I shared with my English teacher and my brother, and in high school I started writing short stories. Later, at Mount Holyoke College, writing teachers encouraged me to try more short stories. I loved the challenges and limits imposed by the short story form. After college, when I first lived in Japan, I began writing stories seriously, but they were all set in the U.S. Then when I was in the New York University Creative Writing Program, I began writing my first stories set in Japan. This bicultural life, going back and forth between the U.S. and Japan, and my twenty-five plus years of living in Japan, has fueled most of my writing since.

The Language Inside is a first person narrative about bicultural Emma who has been raised in Japan but moves to Massachusetts suddenly due to her mother's illness. The story deals with displacement, loss, biculturalism, poetry, love and more, and throughout, as Emma confronts her new environment, there is a constant exploration of language, words and communication in many forms. Verse is a good fit for a such a language-centered story.

Orchards is a first person narrative told from the point of view of bicultural Japanese and Jewish/American Kana who has been sent to spend the summer with Japanese relatives after the suicide of a classmate. The emotions Kana struggles with as she settles into Japanese farm village life and tries to make sense of what happened are intense. Verse seemed a natural vehicle for Kana's voice.

Are you a mikan farmer?
No, but I spent 18 months apprenticed to a mikan farmer absorbing everything I could about mikan cultivation for book research. My daughter and I moved into a small agricultural community for several months so that I could learn more about farm cooperatives and experience life in a tiny rural Japanese village.

Your picture book Twilight Chant is written like a poem, and One Wave at a Time is like a long poem. Do you also write poetry?
I love to write poetry, whether in my verse novels, in my picture books or as stand-alone poems. And I especially love to read and write narrative poems--poems that tell a story, even just a wisp of a story.

The Wakame Gatherers features a girl who goes seaweed gathering with her two grandmothers. How did you become interested in wakame seaweed?
I've lived in a seaside town southwest of Tokyo for many years. During the winter and early spring, local fishing families cultivate and harvest wakame seaweed which they hang to dry along the beach. I love the sight of bright green wakame fronds drying in the wind. My kids and I learned how to gather wakame during the winter months when it washes in with the surf, and we all enjoy the many ways to eat it!

What inspired you to write Ash?
The plot of the novel developed from witnessing a near-drowning incident during travels in China, and from my visits to the southern Japanese city of Kagoshima, which is overshadowed by a sometimes very active ash-spewing volcano, as well as time spent in Kyoto.

Do you think MA or MFA programs are useful?
An MFA or MA in creative writing will not guarantee you publication or a job, but, by seriously focusing on writing for two years, your craft is certain to develop and improve. I loved my years in the New York University graduate creative writing program and often wish I could return for more of that intensity of focus on fiction writing or poetry.

Are you writing more books?
Yes! I'm revising a new YA novel, and I'm researching a historical middle grade novel. I am always working on various picture books. Yet another project is an adult novel set on a mikan (mandarin orange) farm in Shizuoka, Japan, similar to the setting for Orchards. I also write poetry and short fiction, and I've been working on Japanese-to-English translations . . .

When did you start writing for children?
As soon as I became a teacher--immediately after graduating from college. But I would work on a story then put it away . . . sometimes for years. Then, as I became involved in organizing events and workshops for SCBWI in Japan, I began to seriously tackle writing books for children and teens.

What were your favorite picture books as a child?
I loved The Story of Ferdinand by Munro Leaf about a bull who doesn't want to fight and all of the Ezra Jack Keats books. I also loved A Wrinkle in Time. And I read poetry, whatever I happened to come across.

Why HAT in HATBOOKS, your website and blog name?
Well, my full name is Holly Ann Thompson--HAT. I guess I'd better write a story about hats, right?