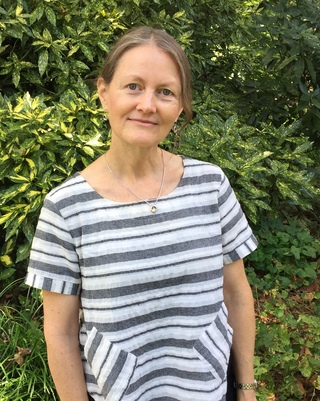 Holly Thompson was raised in New England and earned a B.A. in biology from Mount Holyoke College and an M.A. in English from New York University's Creative Writing Program. Longtime resident of Japan, she teaches creative writing at Yokohama City University, U.C. Berkeley Extension, and Boston's GrubStreet, and presents at schools worldwide.

Holly's fiction often relates to Japan and Asia. Her forthcoming Listening to Trees: The Woodworking Ways of George Nakashima, a picture book biography written in haibun form (a combination of haiku and prose) celebrates the life and work of this visionary Japanese American craftsman (to be illustrated by Toshiki Nakamura and published by Neal Porter Books/Holiday House in 2023. Her middle-grade verse novel Falling into the Dragon's Mouth (Holt/Macmillan 2016) depicts Jason, an outsider American in a Japanese school attempting to use his aikido skills as he faces an escalating bullying situation. Her YA verse novel The Language Inside (Delacorte/Random House, 2013) deals with language both spoken and unspoken and, through poetry that crosses boundaries, connecting a Japan-raised American girl with a Cambodian-American boy and the patients they assist in a long-term care center. In her YA verse novel Orchards (Delacorte/Random House, 2011), which received the 2012 APALA Asian/Pacific American Award for Literature, Kana, a half Japanese and half Jewish-American girl, is sent to spend the summer with Shizuoka relatives after the death of a classmate. Her novel Ash (Stone Bridge Press, 2001), set in Kagoshima and Kyoto, has been recommended as a teaching tool in high school and university classrooms studying Japan, Asia and intercultural issues. Her picture book The Wakame Gatherers (Shen's/Lee and Low, 2007) depicts a bicultural girl who goes seaweed gathering with her Japanese and American grandmothers.

Holly's picture book Twilight Chant (Clarion, 2018) is a lyrical exploration of the transition between day and night and of the animals who thrive during this special time. Her One Wave at a Time (Albert Whitman, 2018) is a picture book story in free verse about grief and healing.

Holly compiled and edited, and wrote the foreword to, Tomo: Friendship through Fiction--An Anthology of Japan Teen Fiction (Stone Bridge Press, 2012), a young adult anthology of Japan-related fiction to benefit teens in the earthquake- and tsunami-affected areas of Tohoku. For more information about Tomo, visit the Tomo blog.

Holly's short stories, poetry and articles have been published in magazines and journals in the United States and Japan. She is a regular contributor to Wingspan, the ANA inflight magazine. Holly serves as Regional Advisor of the Japan chapter of the Society of Children’s Book Writers and Illustrators (SCBWI Japan).

Short bio:
Holly Thompson (www.hatbooks.com) is a longtime resident of Japan and author of the verse novels Falling into the Dragon’s Mouth, The Language Inside and Orchards, the novel Ash and picture books Twilight Chant, One Wave at a Time, and The Wakame Gatherers. A graduate of the NYU Creative Writing Program, she writes poetry, fiction and nonfiction for children, teens and adults, and teaches creative writing in Japan, the U.S., and places in between.

Medium bio:
Holly Thompson (www.hatbooks.com), originally from Massachusetts, is a longtime resident of Japan. She is the author of the novel Ash and three verse novels for young people: Falling into the Dragon’s Mouth, The Language Inside, and Orchards, winner of the Asian/Pacific American Award for Literature. She is also author of the picture books Twilight Chant, One Wave at a Time, and The Wakame Gatherers and she edited Tomo: Friendship Through Fiction—An Anthology of Japan Teen Stories, a collection of 36 Japan-related short stories, including ten in translation. A graduate of the NYU Creative Writing Program, she writes poetry, fiction and nonfiction for children, teens and adults, serves as Co-Regional Advisor of SCBWI Japan (Society of Children’s Book Writers and Illustrators), and teaches at Yokohama City University, Boston's GrubStreet, and UC Berkeley Extension.