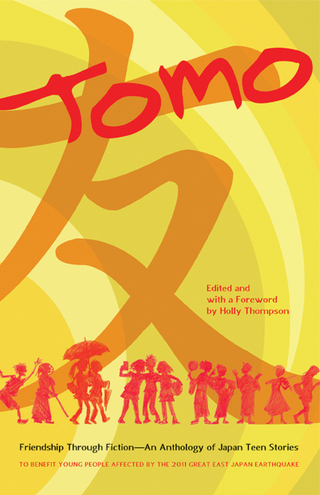 This Eye-Ai Magazine article on Tomo is a 2-page B&W printable PDF.

Tomo (meaning “friend” in Japanese) is an anthology of young adult short fiction in prose, verse and graphic art set in or related to Japan. This collection for readers age 12 and up features thirty-six stories—including ten in translation and two graphic narratives—contributed by authors and artists from around the world, all of whom share a connection to Japan. English-language readers will be able to connect with Japan through a wide variety of unique stories, including tales of friendship, mystery, fantasy, science fiction and history.

By sharing “friendship through fiction,” Tomo aims to bring Japan stories to readers worldwide, and in doing so, to help support young people affected or displaced by the March 11, 2011 Japan earthquake and tsunami disasters. Proceeds from the sales of this book will go directly toward long-term relief efforts for teens in Tohoku, the area most affected by the disasters, in the northeast region of Japan’s main island, Honshu. To begin with, Tomo fund donations will go to the Japan-based NPO Hope for Tomorrow (hopetomorrow.jp), which in addition to providing educational expenses (including university entrance exam fees, travel costs to exam centers, etc.) also provides mentoring, tutoring, and foreign language support to high school students in hard-hit areas of Tohoku.

Visit the Tomo Blog at tomoanthology.blogspot.com to stay updated on book events, read interviews with the
contributors, learn how proceeds from the sales of the book will be used to help teens in Japan and more.

"A big but consistently engaging pro bono anthology of authors with direct or indirect Japanese 'heritage or experience.' A broadly appealing mix of the tragic and droll, comforting, disturbing, exotic and universal, with nary a clinker in the bunch." --Kirkus Reviews

"Tomo is an excellent story collection, presenting a rich and varied immersion in Japanese culture from a teen perspective." --VOYA

"With slices of Japanese language, folklore, history, popular culture, and other ethnic references, Tomo, which means friend in Japanese, offers a unique and wide-ranging taste of Japanese life." --Booklist

"The thirty-six stories. . . cover a wide range of genres (prose, verse, graphic narratives) and feature nine stories translated from the Japanese. With the exception of Graham Salisbury and Alan Gratz, most of the authors, many of whom write for adults, will be new to American teens." --The Horn Book, Out of the Box

"The stories in Tomo, "friend" in Japanese, resonate beyond the confines of tragedy in the Tohoku region to reflect a generation who will grow up indelibly marked but not defeated by 3/11...There is sadness and suicide, loss and, yes, the tsunami. But these stories equally cover everything important to the younger generation as entrance exams, ghosts, J-pop, love, divorce, baseball, gamers, ninjas and dragons coordinate to form a whole." --The Japan Times

"This collection of short stories and poems about Japanese teens is weird and wonderful, studded with the unique color of Japanese teen pop culture, as well as the impact of defining events from the twenty-first century to the present: Pearl Harbor, Hiroshima, the tsunami, earthquake and nuclear disaster . . . . There's something fabulously specific about the pop culture references that can make reading Tomo: Friendship through Fiction feel like a virtual tour of Japan." --Barnes and Noble Review

"The teen protagonists are written with sympathy and intuition, and the stories are all executed with confidence. . . . this collection was divided into ones I liked, and ones I liked more." --Asian Review of Books